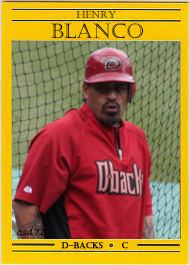 I took this picture as Henry was waiting near the cage during batting practice. Henry was an easy target to take pictures of because he kept looking into the crowd. I don’t know if he was looking for someone in particular or just scanning for female fans. Either way he helped me get a couple of pictures of him by actual turning around.