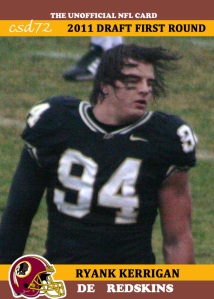 Since Ryan was the highest draft pick since Rod Woodson in 1987 I thought that I would make a few cards of him. This one is a tribute to the ’90 Pro Set card. Unlike most of the football cards I have done so far I made this one from scratch. The design was so simple that it was probably easier than altering an actual card. I changed it up a little to reflect the fact that Ryan was a draft pick this year as well. Overall I think the card did not turn out too bad.

I took this picture near the end of the Michigan football game. I was soaked from sitting in the rain all day, and my camera was getting way to wet as well. One of the last pictures I took was this one of Ryan. It is a little dark, but I still like how it turned out.