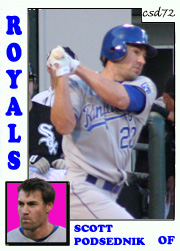 I have done a few Scotty Pods cards so far on this site. I think part of that is nostalgia for the ’05 Championship team, and the other part was that he came back with the Royals right when I started making cards for this site. I had a couple close up shots of his face so I decided to try a 1984 Topps card of him.

Both of these pictures were taken last May when the Royals were in town. The inset picture was taken as he was warming up prior to the game. The Royals players were right in front of me, and I had a great view of them. Scotty was one of the first out to warm up, and was the last to leave. It was during this warm up session where I took the picture of him doing ‘Thriller.’ The main picture was taken that same night, but while Scott was at the plate.