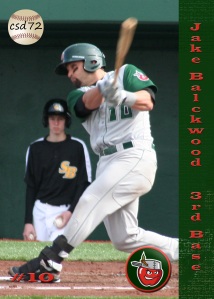 Jake is a fine young player that had a great game when his team came into town. That does not guarantee future success, but it does put him on my radar. Before a team comes into South Bend I look up the prospects for the organization to see who I should watch for. Jake was not on any of those lists for Fort Wayne. In fact not one position player in the top 30 in the organization is currently on their roster. In warmups though I thought Jake looked like a ballplayer. 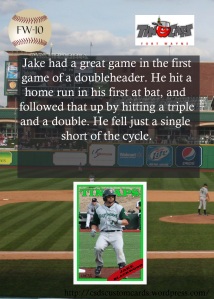 Jake got off to a great start by blasting a monster home run in his first at bat. The picture on the front of this card is of that home run swing. Jake added a triple and a double in the game in the only three at bats he had in this shortened game. The picture on the card on the back is of Jake rounding second after his double. He could not keep the hot streak going in game two, but his team did win the game.