Jimmy is a fun player to watch. He is very good at what he does for one. When he has a microphone on him for TV you realize that after he is done playing he could end up in a studio. 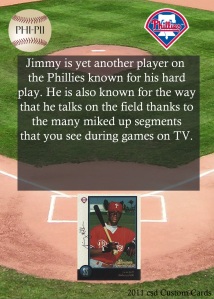 This picture was taken at Wrigley in July when the Phillies were in town to play a night game. I was in the bleachers so it was hard to get good pictures with my camera. I knew that I wanted certain players though, and Jimmy was one of them. I took this picture as he was trying to steal second. The picture of him sliding into the bag that was taken right after this appears on the 1989 Upper Deck card that I made for hiim.