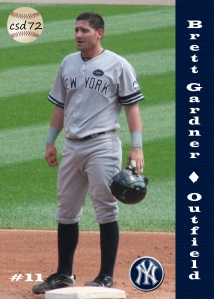 Brett made this set because of his great story. He was not picked by the coach at the walk on tryouts at the College of Charleston. He came the next day in his high school uniform refusing to be told no. The coach let him practice with the team, and he eventually started for three seasons. The fact that he was not even thought of as a walk on while at a small school makes the fact that he made the big leagues that much better. 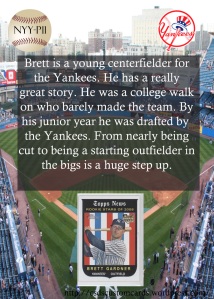 This picture was taken last August as Brett was standing on second at the Cell. I liked the way he was standing on the base while a meeting on the mound was going on. I love action shots, but sometimes good pictures for cards come from the moments when nothing is going on.