This may be the only Red Sox card in this set. I only really had one usable picture of a Red Sox player in the archives. I have to see a game with them this season for a couple reasons, but that is one of them. I like the look of this Red Sox card so I need to make more of them. 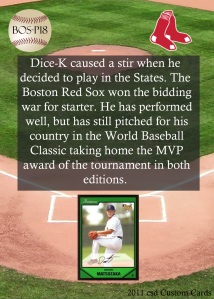 This picture was taken in 2009 before a game against the White Sox. He was coming off of the disabled list, and just throwing before anyone else was on the field. A large crowd gathered, and I took advantage of the moment to get a couple of pictures. My seats were so far away that I didn’t get any other good pictures of the Red Sox that day so this one will be the only card in the preview set.