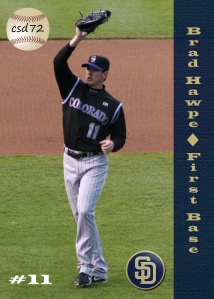 This card reminds me of a 1981 Donruss card. They had no problem with making a team card of a player with a picture on it with another team. I wanted to have all the teams that I could represented in this set so I had to cheat a bit. I have not even come close to anything resembling passable airbrushing yet. If you want to see a player with a cartoon shirt I am the guy to call. 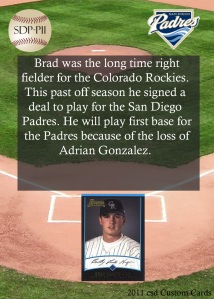 This picture was taken last May when the Rockies were in town to play the Cubs. He started the game, but was taken out late, and Carlos Gonzalez placed in left field. I liked the picture, and thought that he should get in the set.