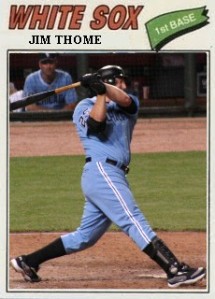 I am getting near the end of my cards that I have made of former Sox players. As I have said before I would like to get all of these out before the season starts so that I can concentrate on the players that are on the team. I think I have talked about how much I enjoyed watching Jim play while he was with the Sox before. As a lefty I always relate more to other lefties so it was nice to see one that could really hit the ball.

I made this card a while ago while messing around with some pictures. For some reason I put a lot of pictures from the Civil Rights game I attended in 2009 into the 1977 set. The blue uniforms just had a 70’s look to them. You can also see that I cheated and put first base on the card because I knew I wouldn’t be able to fit DH on it in any way that looked good.