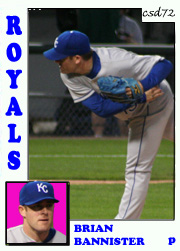 Brian is no longer a Major League Pitcher, but that doesn’t mean that I can’t make any more cards of him. Brian will be playing this season in Japan instead of over here. Thankfully he played for the Royals last season. If you read the blog you know that I made way too big of a deal about last year being the 25th anniversary of my first Major League Baseball game. Brian’s dad Floyd pitched that first game so I thought that it was cool that I saw Brian pitch 25 years later. I ended up seeing him pitch twice last season.

The picture on this card was taken the first of those two times. I made the trip to the Cell specifically to see Brian pitch against the Sox. Both of the pictures above were taken that night. I like the 1984 design, but it is a little harder to make based on the fact that I need the close up picture for the bottom corner. I will try and make a few of them, but I will be limited to players I have seen up close.