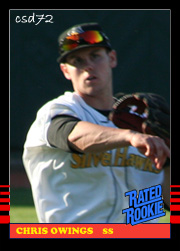 Midwest League Monday continues with Chris Owings. Chris was the 41st overall pick in the 2009 MLB Draft. He played a very solid shortstop last year in South Bend. He is one of the up and coming prospects in baseball. He is listed on a couple of the top 100 lists that come out each year.

This picture was taken as Chris was warming up prior to the bottom of an inning at the Cove last season. I like the idea of having my prospect cards be rated rookies. Both Topps and Fleer tried in their own way to copy this, but it was the first real gold hunt by the companies. Topps had their rookie stars cards, but they were players that for the most part had already played in the bigs. The rated rookie cards would try and find players who had not played yet.