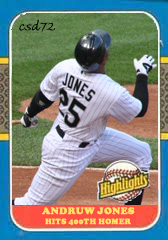 While trying to find a template for the 1987 Donruss base card I came across a couple of the subsets that came out in 1987 from Donruss. The highlights set was kind of cool looking so I thought I would try one. The set basically looked back at the highlights of the season as the name suggests. I thought a cool card would be to commemorate the 400th home run that Andruw hit with the Sox. I was not at that game, but I did see it on TV.

The picture for the card was taken against the Blue Jays earlier in the season. As you can tell by the angle of his head Jones did not just hit a home run. I liked the picture though so it made the card.