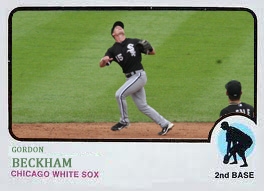 Here is another card new to the site. I have wanted to do a 1973 Topps card, but it is difficult because you almost have to have a template for each position. I found a couple high res images online that I could work off of. I had one for second base and one for shortstop. I found a picture that I thought might fit this template so I went with the 2nd base card first. I will have to try a couple more of these. This is the year after all with the Fisk trophy card.

This picture was taken just before the one that appears on the 1987 Topps Beckham card. Gordon was drifting back to catch a pop up, and my angle was pretty good to get a couple of pictures. I had some fun in Detroit that day, and I have the pictures to prove it.