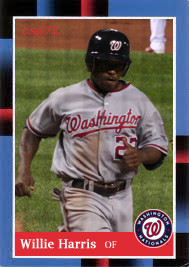 We are approaching the end of the 1988 Donruss dump today. I have a story that I will share tonight that will explain a little about why the 1988 Donruss dump. It is nothing that exciting, but I thought it was cool. I had some ’88 Donruss cards that I could release so why not do it. I also thought that it would be cool to see a new team like the Washington Nationals on a ’88 Donruss.

I also wanted to get Willie on a few cards. He is shown here crossing home plate in August of 2009 for the Nationals against the Cardinals. He will always be remembered by me as the guy who crossed the plate for the White Sox in game four of the 2005 World Series to give the White Sox the 1-0 win, and the World Series title.

This entry was posted on February 21, 2011 by Pinola Photo. It was filed under 1988 Donruss, OF, Washington Nationals .