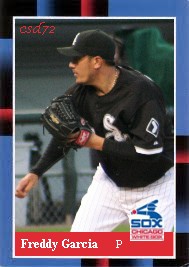 Over the weekend I had a cool find which I will talk about tonight. Before that though I thought that I would post a few of the 1988 Donruss cards that I have made. The first is one of Freddy Garcia. I have always thought that the 1988 Donruss cad was made for the White Sox. It had all the Sox colors in it making the Sox players look pretty cool on them.

This picture was taken during Freddy’s second time with the White Sox. I was glad to get some good pictures of one of the players from the Sox Championship run. Much like Scott Podsednik the Sox were trying to catch lightning in a bottle. After a tough 2008 campaign with other teams Freddy pitched well in the 5th slot for the Sox in 2009.