This site is really about the cards that I make, but I still do pick up a pack every now and then. I usually get a few early in the season. This year Topps has a giveaway where they are giving away diamonds! How cool is that! Before you get to exciting you have to know that the diamonds are virtual. I had five codes to redeem so lets see what I got.

My first redemption code came from a redemption card with a 1977 Reggie Jackson card on the front. The Reggie card helped me pull a 2006 Chris Shelton card. Really? I saw at the bottom of the page that it said start digging so I clicked on that. I was not sure if I lost my card by digging, but with a player like that who cares? 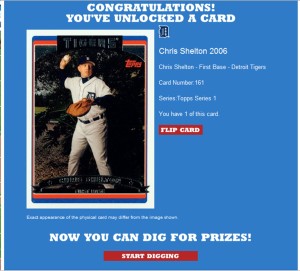 When you click on the link it brings up a page with a baseball field that has a grid overlay. You simply click in each section of the grid to dig there and see what you have won. My first dig was in short center field. I dug up a St. Louis Browns ring. I am not sure how I feel about the ring, but what can you do? I had better see what other cards are in store for me with my remaining four codes.

The second code was on a card with a 2011 Roy Halladay card on it. By entering in the Hallday code I pulled a 1994 Chris Hoiles card. I am starting to see that the cards are not the draw here. Although the Hoiles card would be very exciting for an Orioles fan (or maybe not) it really did not do it for me.

I thought maybe digging would help me forget about the bad Orioles card. When I picked my spot the screen popped up and told me that I had won a Orioles ring. So far I had pulled a worthless Tigers card, and three Orioles relics. If I lived near Baltimore I would have been as excited as I could be. 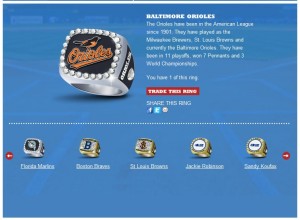 I decided to just see what other cards I had before doing any more digging so I just redeemed a few codes. The next card that I won was a 2006 Bill Mueller card. I was a fan of Bill when he was playing so I did not mind the card even though it was only five years old. I would have liked to have pulled an older card, but you get what you get. Albert Pujols was on the front of the redemption card so I am just glad that it didn’t say that I had to now wait until after the season to see what I won.

The last two redemption cards had a 1953 Jackie Robinson card on it. Maybe the older card on the front will bring me an older card when I entered the code. I thought my logic was flawed, but I wanted something older. When I entered the code I was surprised to see that I won a 1967 Terry Fox card. I never heard of this Phillies pitcher, but any card that old is fine with me.

I only had one code left so I hoped I would get another older card. I quickly entered the code thinking that my flawed logic might have been right. It was not as my last code unlocked a 2006 Victor Zambrano card. 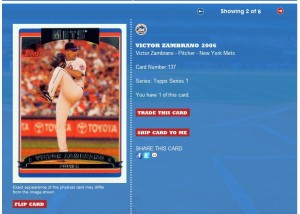 Now that I have unlocked all my cards it was time to dig. My third dig brought up a Florida Marlins ring. 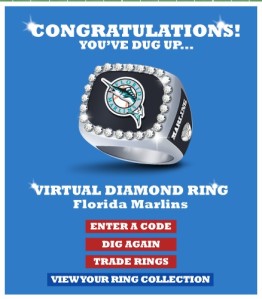 My fourth dig brought up a Jackie Robinson #42 ring. I like rings based on players. I have always liked numbers and how they relate to the players so this was perfect. I like how the design looked, and hoped that I would pull another player ring. 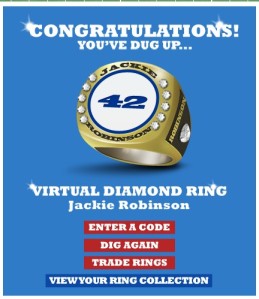 My final dig brought up a Boston Braves ring, but was it the final dig? Next to my ring it said that I had another code waiting for me.

Now I am getting excited. This bonus code has to unlock something good doesn’t it? I hit the buttons to redeem the code, and was disappointed to see that it was a 1991 Andy Benes card. At least we were out of the 2000’s with the cards. This one is at least twenty years old, so maybe you could call it vintage. 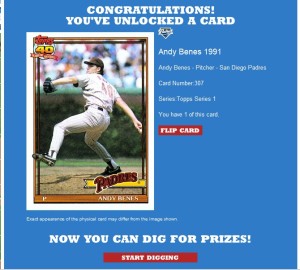 I did have one more dig left. I went back to my field and chose another spot to dig. I was surprised to dig up a Sandy Koufax ring. I have read a little on Sandy including the recent book by Jane Leavy. He was a great player, but he is not as well known because he is in partial seclusion. He usually does not end up in promotions like this. I was pumped about another player ring, and another Hall of Famer at that! Maybe they are all members of the Hall, but this early I don’t know about that.

When it was all said and done I walked away with six worthless cards, and six rings. I guess I now have as many rings as Michael Jordan. Just for fun I thought I would show you the grid over the field for digging if you haven’t seen it. I am not sure how excited I am for this contest. Last year I was getting some nice older cards, and you always had the chance for the Mantle rookie. Maybe I had a bad run, but I am not too pumped about the new contest. What will happen to my e-rings next year? The rings look cool, but what do I do with them? I guess a little more time is needed to evaluate this promotion.

This entry was posted on February 17, 2011 by Pinola Photo. It was filed under Topps Diamond Giveaway .