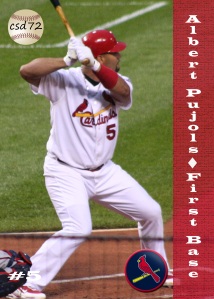 The Pujols dump will conclude with the debut of the 2011 csd preview card of King Albert. After seeing way too much about him all day I thought that my card dump of him was in that mode. The front of the card is pretty standard by now with a picture of Albert that I took in 2009. I saw the Cards in Wrigley last summer, but my bleacher seats did not allow me to get too many good pictures of the star players. I will have to see them play this season to get some pictures for the regular set.

The back of the card I love. Their new park is absolutely beautiful, and it makes a great background for a card. Pictures do not do the new park justice. You have to travel to St. Louis yourself to see this park. They have a new park with a nod to the older parks. I think during the regular season when I am making these cards the blurb will change. I will talk a little about the game the picture on the front was taken at. I just sound dumb coming up with these blurbs for the preview set. It reminds me too much of Twitter. What can I say in just a few words?