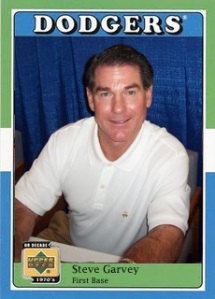 Since I broke the rule earlier today about posting cards later than 1990 I thought that I might as well crush it. Here is a 2001 Upper Deck Decades card featuring Steve Garvey. I wanted to put this picture on a card, and thought this one might be good for it. I like the design of the card, and the picture did not look too bad for it.

The picture on the front of the card was taken at the Bob Feller Museum in Van Meter, Iowa. Steve was signing a bat and a ball for me during one of the many signings I attended when I lived out there. If I had put more of the picture in you would have seen me smiling to Steve’s left. The bat that he signed was the Steve Garvey model that I used as a kid. The bat had seen a lot of use, but I thought it would be cool to have him sign it. He thought that it was neat as well. My first number was #6 so it was cool that I had the Garvey bat. Garvey was just great, and seemed to really enjoy interacting with the fans.