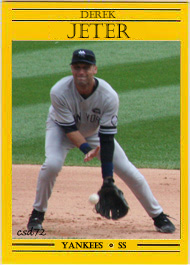 Part of my thinking when I started this site was that I would never have any cards older than 1990. I wanted to keep it to cards that I collected with the occasional older card thrown in. By 1991 I was almost completely out of the hobby. I had other things occupying my time. For some reason I have always liked the design, and one of the first things I did when I got back into the hobby was to get the White Sox team set for the 1991 Fleer.

This picture of Derek was taken last August when the Yankees were in town to play the White Sox. Juan Pierre was stealing second, and Derek was taking the throw. It was not a good throw, and you can see by the look on Derek’s face that he is not too sure where the bounce is going to take the ball.