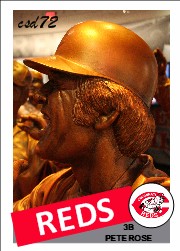 I was supposed to post this on September 11th on the 25th anniversary of his breaking of Ty Cobb’s hit record. I had some things going on at that time that took me away from the site for a while. I have always been a fan of Rose. This year I re-read his book on hitting as well as his book Countdown to Cobb about the chase for the record. I am currently reading his book my story, but it has been hard now that I know all the lies in the book. You would think that this current group of steroid users would have learned from Pete that you have nothing to gain by lying. All of the users who came clean had some repercussions, but for the most part the fans moved on. The ones that continue to lie are the ones that are still under the microscope. Pete is one of the all time greats that will probably not see the Hall of Fame. It is even a shame that he has to get special permission to visit a baseball stadium.

This picture was taken at the Cincinnati Reds Hall of Fame. They have a beautiful area where they have statues of the Big Red Machine. A few more cards from that room may make their way into the set as the winter goes on.