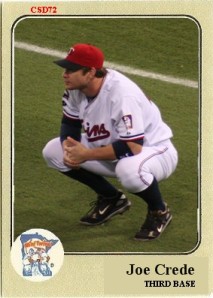 Here is yet another card of Joe Crede. I found a few pictures that I liked of him, and decided to make some cards. This particular picture was taken as Joe was waiting for the Saturday night game against the Sox to start in July of 2009. I thought the picture would work well on the card, and it appears to have worked.