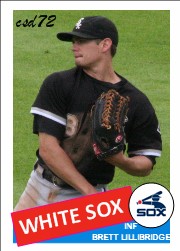 For some reason I have overlooked a card of Brett in this set. Lillibridge was sent over in the Javier Vazquez trade before last season. He has shown flashes of brilliance, but will probably never crack the Sox starting lineup. He is a fun player to watch, and I also enjoy his tweets. I took this picture of him on Monday after he was placed in centerfield  after pinch running for Andruw Jones. He stole second then scored on Alexei Ramirez’s two out single. I liked the dirt on the jersey and the pose. Right away I knew that this would be his picture.

This entry was posted on September 8, 2010 by Pinola Photo. It was filed under 2010 Baseball Custom, 2b, 3B, Brent Lillibridge, Chicago White Sox, SS .