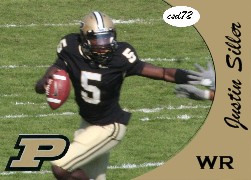 Justin may be better known right now for what he didn’t do than what he has done. He was forced to sit out last season after being kicked out of Purdue. He worked hard last year though to do everything that he had to do to make it back to the Boilermaker squad. He is back with the team this year with a new number. His number 5 already had a taker on both offense and defense. He will wear the number 2 and play receiver with some touches at quarterback and running back planned as well. This should be a fun year to watch Siller.

I took this picture in 2008 during the Purdue game against Michigan. Siller came in with little experience, and led the team to the victory on the ‘Tiller’ play in the final seconds.

This entry was posted on August 16, 2010 by Pinola Photo. It was filed under 2010 Football Preview, Purdue Boilermakers, Wide Receiver .