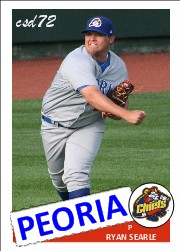 Back to the minors for the next couple of cards. Ryan started the Chiefs game against the Silverhawks earlier in the season. Ryan got the win on the night pitching a good game.This picture was taken as Ryan was warming up before the game. I really had some fun capturing these players as they got ready for the game. They looked like they were having fun, and it showed during the game.

This entry was posted on August 10, 2010 by Pinola Photo. It was filed under 2010 Baseball Custom, Chicago Cubs, P, Peoria Chiefs .