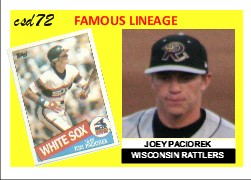 Joey as I said in the previous card is the son of former big leaguer Jim Paciorek and the nephew of former Sox player and broadcaster Tom Paciorek. I decided to put his uncle Tom on this card because this set is modeled after the 1985 Topps set, and the year that inspired it. I really wanted the ’85 Topps White Sox card on here so being the one who makes the decisions I made it happen.

This entry was posted on August 9, 2010 by Pinola Photo. It was filed under 2010 Baseball Custom, 3B, Famous Lineage, Milwaukee Brewers, Wisconsin TimberRattlers .