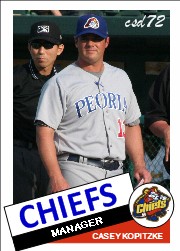 Casey was drafted by the Cubs in 1999 as a catcher. After his playing career was over he became the catching instructor for the Cubs organization. He was the manager for the Boise Hawks for half of last season. He now is the manager of the Peoria Chiefs.

I knew that I wanted a picture of Casey for this set. I cheated and waited until the Silverhawks manager Mark Haley was showing him the field as they were exchanging the lineups. For some reason Casey looked right in my direction so I got a much better picture than I thought that I was going to.

This entry was posted on August 4, 2010 by Pinola Photo. It was filed under 2010 Baseball Custom, Chicago Cubs, Manager, Peoria Chiefs .