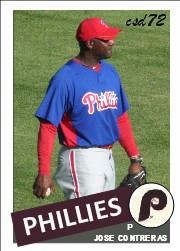 Early in this set I had a card of Jose using him in a Charlotte Knights uniform. I did not think that I would see the Phillies in person this year so I did what I could to get Jose in the set. After Sunday’s game I have a few pictures of Jose so we may see him a couple of more times on this site.

I had some action shots of Jose, but as usual the less going on in the picture the better it looks on the 1985 Topps set.

This entry was posted on July 20, 2010 by Pinola Photo. It was filed under 2010 Baseball Custom, Jose Contreras, P, Philadelphia Phillies .