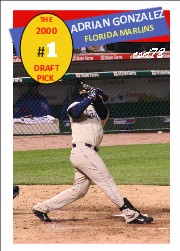 This is the type of player that I would expect to see listed as a #1 overall pick. Gonzalez has been a force in the majors over the last few years. He is one of those superstars that fans come out to see, even if he does play late at night in California. He will be a free agent this off season so it will be interesting to see where he ends up playing.

I was lucky enough to see him play a couple of times. The most recent of those being last season. In that game he hit two home runs, one of which is captured on this card.

Here is the complete rundown of the 2000 first round:

A LaPorte native Chris Bootcheck can be found as the 20th overall pick in the draft.