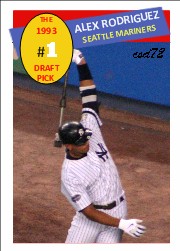 We jump from 1987 to 1993, but stay with the same team. Alex Rodriguez was taken #1 overall by the Mariners in the 1993 Major League Draft. We all know what has happened since then. ARod has gone on to change baseball with both his bat, and his agent.

I didn’t have a picture of ARod in a Mariners uniform so I used one from 2008 of him in a Yankees uniform. I took the picture during my only game in old Yankee Stadium. Alex was warming up before one of his at bats against Mark Buehrle.

Here are the top 28 players taken in the draft. I don’t see a lot of Hall of Famers, but some very good ballplayers came out of this first round.